Back on the eastern side of the North American continent, and once more in picturesque Virginia, each March produces the Virginia Festival of the Book, held in the ever-graceful, picturesque city of Charlottesville.

The Virginia Humanities council sponsors and promotes this festival which is the largest and most popular book festival held annually in the Mid-Atlantic region. It is even larger than Farmville’s Children’s Book Festival and Fairfax City Fall for the Book Festival. Also, this one is held on March, 2019, the springtime, so you will get a different season and atmosphere than in the fall. This upcoming March will bring the 25th anniversary of the festival.

Charlottesville itself is noted for its spectacular scenery with rivers and lakes framed against the backdrop of the foothills of the Blue Ridge Mountains.  Among the most notable landmarks is Monticello, home of Thomas Jefferson.  Equally impressive for beauty and architectural splendor is the campus of the University of Virginia, which also features a central campus designed by Jefferson.  The homes of James Monroe and James Madison are also nearby.  These landmarks, combined with the close proximity of the Washington DC metro area, make this festival another ideal event to include in family vacations.

Meeting Of The Minds 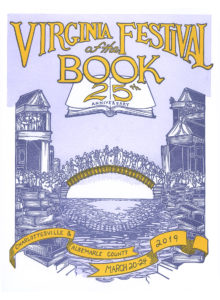 As is true of so many festivals, the Virginia Festival of Books brings together authors representing a wide variety of genres; hence, it is fortunately unavoidable that book discussions often bring about lively debates about both contemporary and historical issues.  Philosophical discussions abound, alongside discussions of women’s rights, human rights, civil rights, and even animal rights.  One of the great beauties brought out through reading is the discussions and or interpretations upon the authors intent, and what better way to discover that, than at a book festival where one can ask and discuss or debate even with the author him/herself. With over 250 programs continuously running throughout the festival activities, there is bound to be a topic or ten for you to immerse yourself within. Even more impressive, the majority of these events are free.

The 2019 dates have been announced.  This festival will be held March 20-24, 2019.   The headliners for the 2019 festival include such notables as Laurie Halse Anderson, whose upcoming book, Shout, (March, 2019) pays homage to the MeToo Movement.  Also appearing is Barbara Enrenreich , presenting her recent book, Natural Causes: An Epidemic of Wellness, the Certainty of Dying, and Killing Ourselves to Live Longer, explores the art of joyous living and acceptance of mortality. And Jarrett Krosoczka, the winner of the Children’s Choice Book Awards Third to Fourth Grade Book of the Year and has been a Will Eisner Comic Industry Award finalist. I’m sure Jarrett will be a favorite with adults and children alike. These authors are only a small sample of the very impressive lineup that book festival lovers will not want to miss.  The full schedule will be announced in January of 2019. Until then enjoy reading and “Keep your nose in a book!”

What I Learned From Texas Book Festival?