Even though the town of Farmville, Virginia, is a small town, located in the middle of the state, it is rich in culture and history. Farmville is the home of Longwood University and is the town nearest to Hampden–Sydney College.  Farmville also boasted a strategic location along the Appomattox River canal navigation system from 1795 to about 1890; built by African-American laborers, the canal allowed tobacco and farm produce to be shipped from central Virginia to the port at Petersburg, Virginia making the town very profitable.  Later, in the mid-19th century, Farmville developed a small but important coal mining operation, providing coal locally to areas where it was too expensive to ship it otherwise.  Notably, Confederate General Robert E. Lee retreated through Farmville, in his desperate attempt to find rations to feed his soldiers.

Located on the campus of Longwood University, in Farmville, Virginia, the Virginia Children’s Book Festival was held October 17 – 19 in 2018. This is another relative newcomer among festivals, founded in 2014. The VCBF’s website states that its’s program’s mission  is to nurture and create lifetime readers, no matter what their current circumstances. The VCBF has adopted a unique approach, utilizing highly interactive programming.  Focusing on the deep belief that reading is the best prediction for future success. The entire aim of the Festival is to instill and foster a deep and abiding love and desire of reading.

The VCBF does offer the traditional book festival panels, but this event breaks away from the traditional “classroom” format, encouraging children to use their imaginations as they engaged interactively with the authors in such activities as doing art with illustrators and playing games to encourage reading in a totally participatory format.

Through their multiple reading cart, welcome wagon, “hip-hop” through children’s literature, Civil Rights in Children’s programs, and sensory sensitive programs, VCBF has touched the lives of over 50,000 children, has given away over 71,000 books, and has won 2 awards in its short 5-year stint. 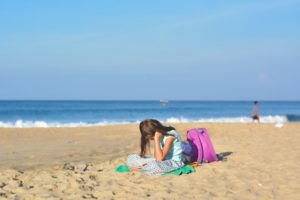 Reading a book is a wonderful habit

Every year the VCBF promises three amazing days of innovative and creative programs created to help children develop their own stories while getting the best advice from over 27 authors and illustrators. Past and present authors have included several Newberry and Caldecott National Book finalists as well as many New York times top-ten authors. Returning authors including Sophie Blackall and John Marciano have been engaging active imaginations since the festival’s inception, touching the minds of some 10.000+ kids. And in 2017, they were proud to introduce a partnership with a local speech and hearing, learning company and together they created a new program specifically designed to reach children who might have special needs. Also, in 2017 more comic book designer and graphic novelists were added to the line-up which they felt sure would further entice active, curious minds.

The super-mom and English teacher extraordinaire in me, always wants to have at least 3 book titles at any given time to recommend to a querying reader, especially when it comes to the youth of America, even more specifically young men. Getting some to read and actively engaged can on good days be less painful than a dentist 2-hour front molar root canal. Therefore, as I perused the titles of the 2018 lineup, I have chosen a few books that jumped out at me. 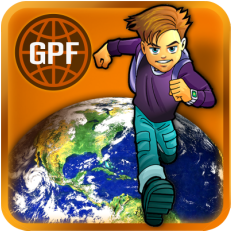 The Jack Stalwart: Passport to Adventure app was the recipient of a Parent’s Choice Recommended Award (2013)

If you are looking to keep your son engaged in actively reading for a bit, you might select, Elizabeth Singer Hunts’ a 14-book collection series, and BBC Radio’s must read book for boys, Secret Agent Jack Stalwart. These chapter books are lively, fun, and educational for boys and even girls as they follow Secret Agent Jack Stalwart on his missions and adventures around the world in his attempts to solve top secret crimes in historical cities and backgrounds.

I personally can’t wait to read The Mesmerist by Ronald L. Smith. Who cares that it’s for adolescence, the plot is right up my ally with a Victorian Supernatural Fantasy. Having caught the eyes of Marvel and Disney for his previous works and receiving the 2016 Coretta Scott King/ John Steptoe New Talent Author of the year Award and the ILA Award for Intermediate Fiction the same year, I have a feeling he might be my next Edgar Allen Poe. Sure enough, his website even features a center page black Raven; you know he’s whispering “nevermore” as you turn the pages.

The next author, I fell in love with from her book Pride. Usually an author of young adult literature, author IbiZoboi, created a remarkable attempt as a younger level author, with her middle school debut My Life as an Ice Cream Sandwich. With the New York Time, The Horn and the Rumpus all behind her, we can expect great things from the Haitian born talented beauty.

I am always thrilled when I find new literature from the American Indian Culture. Being 1/16, my grandfather died before I was born, so I know little of my own Native background beyond being Chickasaw of the Cherokee nation. Imagine my pleasure at finding Choctaw writer, storyteller and speaker Tim Tingle’s,  How I Became a Ghost, the winner of the American Indian Youth Literature Award and the next installment in the When a Ghost talks: Listen , young adult series.

As advertised, there is also a terrific line up of award winning writer/illustrators such a Lulu Delacre with over 36 titles under her belt, and musician and songwriter Kid Pan Alley , who helps inspire kids to cooperate and build a dynamic and exhilarating educational musical exchange while teaching the process of songwriting.

With a lineup of 27 authors equally amazing as the few I mentioned here, and equally talented artists and musicians to fill 3 whole days of activities; in addition to thrilling children of all ages with the magical world of the printed, imaginative, and fire breathing, written word behind each powerfully bound book, is it any wonder the VCBF is a marvel 5 years in?

Unfortunately, at this time, the exact dates for 2019 are unconfirmed, but October dates are probable.  Stay tuned; and keep your nose in a book!

Morristown Festival Of Books, 2018: Veteran Authors To Be Featured